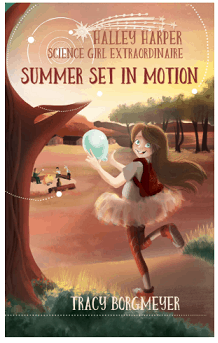 What we liked: This is a chapter book that shares the adventures of an awesome 9 year old little girl who loves science and curious about science, at the same time introduces many scientific concepts in a fun and appropriate way for the kids to fall in love with the science.

Could have been better: Story line is very much predictable. There is not much of varieties in the characters. Girls who love science are portrayed as not-normal and weird, like a square peg in a round hole in this story.

Our Verdict: This is pretty simple and easy to read book, filled with lots of fun that will make anyone giggle, encourages a love for science and most specially, female is portrayed as the main character, who is a science-loving girl, which will help the young girls to relate easily. Hats off to Tracy!!

This book starts with a mischievous 9 year old girl, Halley Harper, who creates a mess while trying to attempt a science experiment at home.  In order to avoid such mess and keep her experiments out of their home particularly kitchen, her parents decide to send her to some science camp. She also overhears someone calling her a square peg in a round hole and almost believes it to be true. At the same time a science camp is happening and they send her for the summer. Halley accompanied by her best friend Gracelyn goes there, where the real adventures and mystery begins.

She must work along with the fellow camper and try a series of challenges with her love for science involving Newton’s Laws of Motion. But a series of “Mishaps” lead Halley to believe that the camp is being destroyed and more likely to be closed forever. Will Halley use her science knowledge to uncover the mystery? Will she make her experiments to turn ordinary into extraordinary and save Camp Eureka from closing forever? 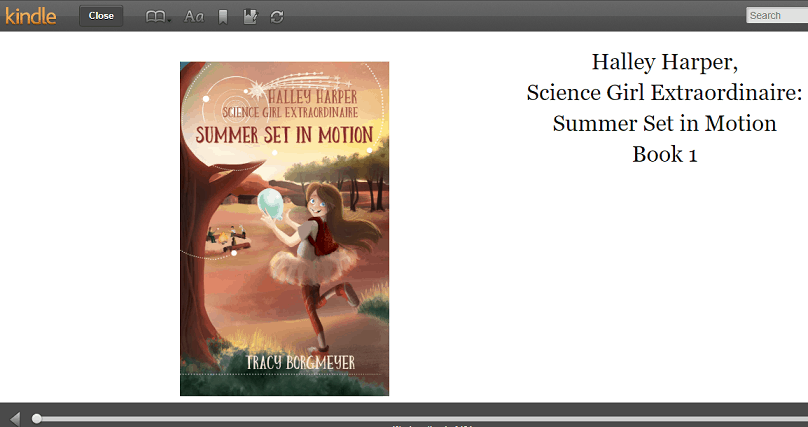 This is simply a book fully packed with scientific concepts and detailed explanation for your little ones to understand in an easy way, at same time helps in demonstrating these concepts through varies ideas which in turn can be replicated anywhere(Home or school or camp). Believe me, the kids will surely try at-least an experiment at home and hope parents encourage!!

The main character, Halley, is completely a science-obsessed girl and looks at the world through her curious mind with her interest and quirky love of science, while her best friend, Gracelyn, though not much interested in science, is always happy to tag along with Halley to science camps and support her friend, Gracelyn is a great counter part and her energy when low. Cameron, a girl teenage counselors is a person that the two younger girls admire and respect. Ms. Mac, one of the leaders of the camp,  is very lovable and adorable, one who is very supportive of Halley’s passion. Nathan, one of the male character indeed the main male character, who at times supports the girls at camp, is not quite good and talks inappropriate. Most importantly Halley’s father, who is very much supportive on her love and passion towards science, helps her practice and perform her science mess as much as she wants, has in fact, built a tree-lab at home specially for her and keeps encouraging her. Such an lovable father, right? The book also has a number of other female role-models who are science-loving, which in turn will help bring out lot of women scientist to the world.

It also makes me question as to why Halley is portrayed as a “square peg”, and it bothers me that Halley’s mother is more concentrated in a clean house then her daughter’s love for science and fails to encourage her daughter. Slowly women have started conquering the world in all fields and soon such real girl characters will be noticed and hope to see weird portray of girls who love sciences will be seen something cool in the near future. This book certainly provides a similar role-model for any girls who do love science,  if not, will make them fall in love with science.

Though the story line is very much predictable and could notice a lack of diversity among the characters, this is a “must read” book for the kids to enjoy and cherish the fun with the science and to develop their love for science specially, girls 🙂